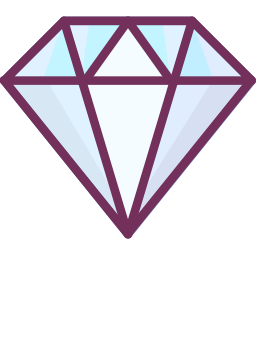 0 have liked it about 5 minutes reading

Last weekend, on the first weekend of March, I went to clubs in Berlin. It was a quite interesting experience. Both on Friday night and Saturday night I spent time with my friend at partying. Sunday I went to a GMF party alone. Spontaneously I got an idea to record, how many guys I would get and what would be my rating based on my records. I have never thought to do so, but since I have been clubbing and got always so much attention from various age of guys, I thought that it could be a fun idea to see, how good I am doing if I’m partying ALONE.

I knew that I’m quite popular at the clubs. My biggest fear is to contact with people and start the conversation. However, this time I was intentionally started to pay attention to the guys who are surrounded by me. I don’t usually care, how many guys are looking at me, or moreover, starting to talk and more. I just know that the attention I get, is normal and I’m used to it. So, what I did?

The methods of recording

Well, I started to take note of the people who are starring at me, starting a conversation or even touching me. In fact, the touching part I was actually not expected to count, however, I thought it could give me extra points. Touching is quite forward activity, isn’t it? And mostly, it will happen only if the person is really attracted to you. So I thought it could be fair to count it like an extra point plus an extra bonus. But before we go to the stats and numbers, I would shortly introduce what was the night and how did I survive, being alone in such big party, like GMF on every Sunday at Alexanderplatz in Berlin.

GMF is a bit like “normal party”, without dark rooms

Berlin nights are mostly crazy and wild, we must know how “sinful” here is life. Every night is getting crazy and hot, a lot of darkrooms, sex party’s, wild and naked people. In short: everything without limits. GMF is a bit like “normal party”, without dark rooms. I have been there like 3-4 times and so it’s not my first time at this party. GMF is the gay event every Sunday night in Berlin. It supposes to be the biggest gay event in town, considering that actually only a few places are open on Sunday night and most gay men are going on that party, as it gathering altogether. So I went there and started to order some drinks. Was quite fun how guys were started to look at me on this very first moment. Some guys were just so shy to come to talk with me, instead of just staring at me. And then there were guys who were a bit more “forward” and came to say hello even when I was on my phone.

After being there like one hour, I came to an idea to start actually recording the stalkings, talking and more. So what I did? I opened up on my iPhone the notes tool, and on every single song, then switched the location on the club. Created the five-star rating system and started to record the corresponding numbers. I did not count those views, who was not constant. Means, I was not counting numbers from guys who were just looking at me once. So the numbers I count, was constant lookings at me, touchings and talking. Then I did math operation and started to calculate the average rating. I subtracted the points 5 of 5 from those areas at the club, where I got no attention and subtracted extra minus points from the areas, where people left me (even if they did not do it intentionally), to create a more better, relevant and honest result.

During of 1,5 hours of recording (such a long time, eh?), I had at this club in 10 different places, starting from the DJ stage, ending up on the other side of the club. So in the first two areas at this club (which were on the left and right side at the DJ stage), I got from both areas 1 view. My points were calculated based on these rules:

After leaving from the DJ stage and had my toilet pause, I got one view and one touching, which gave me 4p. + 5p. so 9p. of 5p. in just one place. After having a toilet and a small pause, I started to get 3 views when I got back to the dancefloor. So the complete results were the following:

So now we know, after this experiment, that I am still quite popular. But we all know that we are not everyone’s taste. That’s why the escort site provides us a wide range of different guys – starting from twinks to the bodybuilders. But my high density of finding a guy at the club is still the evidence that I look attractive and wanted, from many different types of guys. I would say that the event gathered approximately together around 200 different people from different age, culture, nationality and so on. Fun fact is that AFTER I left from the club, I stuck with three guys, asking on the road back home, that where I am going and what is my plans. The one guy even asked if I want to go to his place. They all were around 26-29 years old. I’m not actually sure if they were even gays, bis or whatever. But they were quite nice to me.

The night was crazy! I would not count those many views and talks that happened before and after the experiment, but if I would count them as well it would give me extra 27,5 points as there were actually many more people who were showing an interest in me. Although they were one or two guys on Grindr who wrote to me after the party and gave me compliments about “how cute I was at the party” (Thanks, guys). See ya probably in next celebrations, eh? 😉

Since comments are moderated, they do not appear on the site until they have been approved. I am not responsible for the content posted by users. Comments must be on-topic and not abusive. Criticism is allowed. However, personal attacks against me will not be permitted, and any criticism should relate to the article in question. Do not post spam and affiliate links. Please do not ask for information about my services and/or my availability in the comments. I reserve the right not to approve your comment if I find it does not follow the good commenting practice.

Quiz Still not sure? Need more confidence? Click here to take my Quiz and find out if we match! »

Signup to receive news and special promotions directly in your email.

You like me more than words can say? Help me to achieve my study plans and be part of my future. Contribute now.

Welcome to my loyalty program!

As a VIP client, you can now enjoy many great perks, and advantages, such as my loyalty program – exclusively only to clients like you!

How does it works?

Free night or free booking is not possible to postpone, and must be used immediately after the 5th booking. If you lose your VIP client status, then all remaining nights or bookings will reset and you must start over again from the first booking.

Thank you for being my loyal client!

Request more information about my extra services and the services that can be requested during our companionship. The information is available only to authorized users. Request your download link here.

Please pay attention of the following!

Yourtwinklover.de is a website for promoting escort services. You must be at least 18 years old or in legal age to enter this site.

Thanks for your input! My Gold clients have free access to the Priority Contact service. To check if you are eligible for the free access, please complete the next step. I will send you the email containing the link to access it. Once you received the email with the access link, you can immediately start using the Priority Contact service. This process should take less than a minute! If you already have a client account on yourtwinklover.de, you may log on to see what options I have for you.

You can make advance payment via bank transfer. The details of the bank transfer I provide you after booking confirmation, upon request.

Please review also my booking rules and terms on my rules page.

Customers are really aware of the growing number of fake escorts these days. Bypassing the verification, I help my customers to build trust in me and make the escort marketplace a safe and better place for everyone.

How do you know that my photos are real and up to date?

I do not provide verification to each client separately. However, I provide you a verification from several services, such as escort services to verify my photos and make sure that all my customers have peace of mind, knowing they are meeting the person they see in photos when it comes to that we have an appointment scheduled for the first time.

How does the verification method work and how do I process them?

Sleepyboy.com are very pleased to introduce our new verification system, giving customers the peace of mind, knowing they are meeting the person they see in photos.

The method of how it works is that I must upload or record Two videos. Both are optional and can be shown either to sleepyboy.com staff or to customers too, the choice is mine. 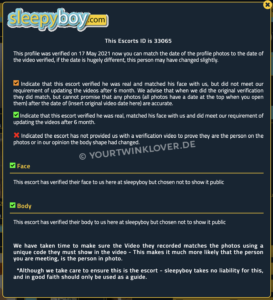 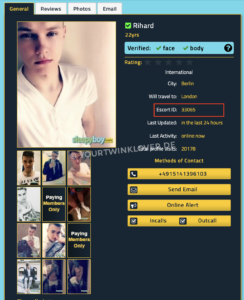 Hover on the image to see more details.